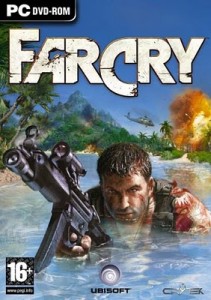 In Far Cry, you play as Jack Carver, a guy who’s been hired to sail a mysterious woman around the Pacific. However, Jack’s ship suddenly comes under attack. After washing ashore on a tropical island, sans the mysterious woman, Carver must investigate his surroundings so that he can find her and eventually rescue her from an army of heavily armed mercenaries. From this point, you’ll delve into a story that combines the epic adventure of Half-Life with the bizarreness of The Island of Dr. Moreau, along with a good, healthy mix of Jurassic Park style tropical island creepiness. You’ll explore facilities worthy of Half-Life’s Black Mesa, battle it out with brutally tough opponents, and assault a volcano stronghold in a finale inspired by James Bond that also offers a nightmarish vision of hell